In honor of my state’s sesquicentennial, I will devote the Friday Ten to all things Oregonian.


1
We have a town called Wanker’s Corner. Every British tourist ever to set foot in Oregon goes there to have their picture taken by the sign.


2
One theory for the origin of the state’s name is that it’s from the French word for hurricane –ouragans. Early French explorers called the Columbia River “Hurricane River” – le fleuve aux ouragans – because of the wild winds that scour through the Columbia Gorge.

That may well be a crock of Wikipedian wanking, but I like it.


3
Our state seashell is the Oregon Hairy Triton, a fact I did not know, but which I love so much I am now determined to name a character in my mermaid book Harry Triton.

4
Oregonian author Rosanne Parry’s middle grade novel, HEART OF A SHEPHERD, was recently released, and she had her book signing last night at Annie Bloom’s Books. Based on the excerpts she read last night, I’m going to enjoy it. The story takes place in rural eastern Oregon, about a boy who tries to keep the family ranch going after his father is deployed to Iraq.


5
Our state animal is a rodent: the American beaver, although its Latin name (Castor Canadensis) would indicate that it is a Canadian beav, eh? Whatev.

They usually mate for life. Awww.

Their eyes are covered by a nictitating membrane.*

If you dismantle their dam, they will industriously rebuild the dam as many times as they have to, until you physically relocate them to a new neighborhood. If it were not for the destructive element of that kind of determination, it would be a very endearing trait. Tenacious B in da house! 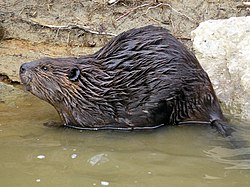 6
Oregon is the United States’ leader in forest fires.


7
Our state tax system is a mess.

Because we are one of only five states with no sales tax, and voters CONTINUE TO VOTE IT DOWN every time the proposal makes it onto the ballot, we NEVER HAVE ENOUGH MONEY. This also causes Oregon to have the fifth highest personal income tax per person in the nation.

Don’t get me started.


8
The Thunderegg is our state rock!

It looks like an ordinary rock on the outside, but if you slice it open and polish it up, you will find amazing patterns and colors.

Which is awesome, because if you slice me open and polish me up, you will find amazing patterns and colors.

Wiki again: According to Pacific Northwest native legends, the Thunder Spirits lived at the highest reaches of Mount House and Mount Jefferson, and when they became angry at each other, they threw these spherical rocks at each other.

9
We have the deepest lake in the United States, and the seventh deepest in the world - Crater Lake. We took a trip there in 2007.

* English major trivia quiz: Which scandalous novel was I reading when I first saw the word 'nictitating'?
Collapse